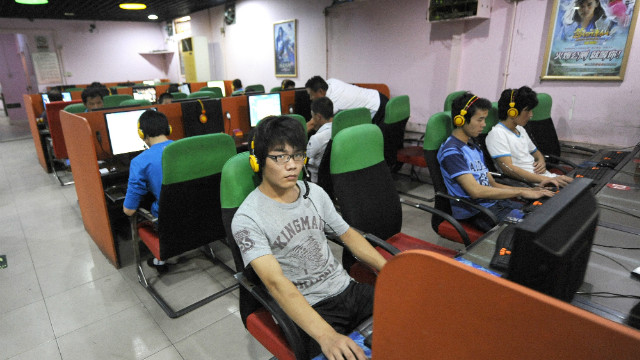 Here’s a question for all the netizens in China: what do Internet rumors and cocaine have in common?

According to Chinese state media, they are, in fact, very similar. END_OF_DOCUMENT_TOKEN_TO_BE_REPLACED

How would you feel if your smartphone was spying on you?

Millions of people around the world got a taste of that earlier this week.

The cause for this ongoing privacy scare: an analytics company called Carrier IQ.

A video posted by security researcher Trevor Eckhart reveals that Carrier IQ can log nearly all your phone activities including calls, messages, location and even keystrokes. END_OF_DOCUMENT_TOKEN_TO_BE_REPLACED

An online marketplace for digital art

When Bill Gates built his gigantic mansion on Lake Washington, one of the most talked-about features was the video wall that displayed digital versions of artwork.

While many marveled at this innovative idea in the early 90s, few had the ability to recreate a digital art collection at home.

Fast forward to 2011, this is about to change with the launch of s[edition] – a new website for “digital limited edition art”.

But what exactly does that mean?

According to co-founders Harry Blain and Robert Norton, s[edition] enables artists to create purely digital artwork, such as the images below, with technology that limits how many copies of the piece can exist.

END_OF_DOCUMENT_TOKEN_TO_BE_REPLACED

China on route to see its first Good Samaritan law

When it comes to Good Samaritans in China, “to be or not to be” is a constant struggle.

If you are among the many residents who worry about becoming a victim of fraud after helping people in need, we’ve got some good news for you.

China is preparing its very first Good Samaritan law to protect bystanders who choose to rescue a stranger in distress. According to Guangzhou Daily, officials in the southern city of Shenzhen are soliciting public opinions on a draft of a local Good Samaritan regulation designed to encourage altruism.

The draft follows the tragic death of Yue Yue, a two-year-old girl who was ignored by passers-by as she lay dying in a busy street in October. Graphic footage of the toddler’s death triggered widespread discussion of the “prevalent apathy” in Chinese societies. Many called for a new law to tackle the culture of avoidance and eliminate scams to accuse well-intentioned citizens.

Sources include Chinese social media sites such as Sina Weibo ranking page (风云榜), Baidu Beats, and Weibo Top News (新浪新闻). Please keep us posted with what's buzzing on your radar and let us know your thoughts in the comment section.

Chinese netizens criticize school bus donation to Macedonia – China’s donation of school buses to Macedonia has triggered criticism online, where netizens called this decision "ill-considered" given their country’s poor safety record and a recent crash that killed 19 preschoolers. More details here and you can read the Global Time editorial defending this donation here.

Hepatitis C outbreaks in Anhui – A Hepatitis C epidemic has broken out in Woyang county in Bozhou, Anhui Province, and may have been caused by unsafe injections (dirty needles). Officials from the Anhui Provincial Health Bureau said on Monday 56 potential carriers of the virus were examined and 13 were tested positive. Many of the Hepatitis C carriers are children. More details here and more images here.

Xiao Yueyue mini movie – A short movie has been made in commemoration of Xiao Yueyue, the young girl who was repeatedly run over by a car in the presence of indifferent pedestrians. The clip, entitled "Xiao Yueyue mini movie" (小悦悦微电影), encourages viewers to show more compassion towards one another. More details in Chinese here.

*Viral Video* Angry girlfriend in subway – A candid video of a girl yelling at her boyfriend in the subway has been widely circulating on Chinese social media portals. In the clip, the girl insulted her boyfriend for “having no money” and said “guys without money are trash (男人没钱是垃圾)”. The boyfriend remained silent the entire time.

The video sparked heated online discussion on whether it is socially acceptable for men not to have a large bank account. You can follow the discussions in Chinese on Sina Weibo's dedicated topic page here.

How do you usually report counterfeit currency?

You probably called the bank hotline or emailed the customer complaints department.

Well, not if you are complaining to one Bank of China branch in Fujian province, which asks people to send complaints to what must be one of the world's longest email addresses.

While some netizens laughed about the sheer absurdity of the email address, many expressed frustration towards the bank, accusing the management for “deterring customer complaints intentionally”.  END_OF_DOCUMENT_TOKEN_TO_BE_REPLACED

I am never an early riser.

Because the first-ever “All Things D” conference – AsiaD – kicked off in Hong Kong from Oct 19th to 21st, marking a significant milestone in the region’s digital history. For the non-geeks out there, “All Things D” conference is one of the largest and most prestigious technology conventions in the world. Organized by two of the most respected tech columnists, Walt Mossberg and Kara Swisher, the conference brings together top-tier innovative and successful business pioneers as well as technology titans with an exclusive preview of industry trends.

Even though I didn’t get to sit through the entire programme (of course work comes first! Disclaimer: my boss reads this), I was fortunate enough to tweet-spam the first few sessions when Walt spoke to Yahoo Co-Founder Jerry Yang, ASUS Chairman Jonney Shih, among other guests. You can review all the conference-related tweets at “#AsiaD”.

For me, one noteworthy highlight from last Thursday’s morning session was the amazing “light field camera” demo by Lytro Chairman Charles Chi. The team unveiled the product in California only six hours before rushing to Hong Kong, and many reports have already coined it the “revolutionary new camera” for its ability to refocus images. Check out the company’s Living Pictures Gallery to grasp the concept.

Needless to say, a digital convention deserves a digitalized coverage, and without doubt, the team of talented and professional editors at All Things D truly defined the meaning of real-time, seamless online reporting. For more on the talks, speakers and demo at AsiaD, visit AllThingsD.

Although AsiaD concluded Friday afternoon as I obsessively refreshed my Twitter feed at work for updates, I slapped myself awake again on Saturday for another digital meet-up in Hong Kong – Startup Saturday 2011.

While D conferences occurred at the top level, local entrepreneurs are also organizing similar meet-ups in a growing grassroots movement. “Startup Saturday 2011” is a perfect testament for the booming entrepreneur community in Asia.

Co-organized by StartupsHK and BootHK, the one-day event attracted hundreds of startups, investors, developers and tech enthusiasts, including the “super angel investor” Dave McClure from 500 Startups.

AsiaD speaker AirBnB CEO Brain Chesky also made an appearance on stage as he shared his outlandish yet ingenious startup journey including selling “Obama-O” and “Captain McCains” cereals, and paying a personal visit to every single one of the early AirBnB users in New York.

Through roundtable discussions of both HK and US startups as well as an investor panel, I had quite an interactive crash course on the entrepreneurial scene in Asia. Take a look at the Twitter feed #SUS2011 for a detailed recap, and check out Jason Li’s live art notes of the entire conference.

Two-year-old Yue Yue is still fighting for her life in hospital.

Grueling footage that has sparked outrage online shows her as the victim of two successive hit-and-run incidents outside a hardware market in Foshan, Guangdong Province. It shows more than a dozen passersby ignored the injured Yue Yue as she was left barely moving in a pool of her own blood, only to be rescued 10 minutes later by a garbage scavenger Chen Xianmei.

In an emotional video posted online, you can see Yue Yue's parents kneeling with their foreheads to the ground in a gesture of extreme deference. Chen looks evidently uncomfortable at the attention and tries to get the couple to stand up.

According to local reports, Chen has been criticised in China; many have accused her of being a fame-seeker. However, Yue Yue's mother says she believes Chen was showing the goodness in human nature. END_OF_DOCUMENT_TOKEN_TO_BE_REPLACED

A graphic video showing a toddler in a brutal car accident is triggering massive online reaction in China.

A surveillance camera in Foshan tracked every detail, as a van ran over two-year-old Yue Yue.

Sina Weibo has a page dedicated to her story and the accident, which took place on Thursday.

The video is so disturbing, we chose not to air it on CNN/News Stream tonight (and do brace yourself, if you choose to see it - it is VERY graphic.). It shows a number of witnesses walk by and ignore the stricken child. It also shows another van run over her a second time.

Minutes tick by until, finally, a trash collector sees Yue Yue and carries her to the side of the road.

Eventually, her mother appears and rushes her to the hospital. And again... every single moment is captured on closed-circuit television.

On this page, you can see a screen capture after the accident. Yue Yue is lying on the ground, motionless.

END_OF_DOCUMENT_TOKEN_TO_BE_REPLACED

Sources include Chinese social media sites such as Sina Weibo ranking page (风云榜), Baidu Beats, and Weibo Top News (新浪新闻). Please keep us posted with what's buzzing on your radar and let us know your thoughts in the comment section.

Many top trending topics still relate to Tuesday's Shanghai metro line 10 collision. Although Shanghai Metro Department received praise from netizens for updating the public via its official Weibo in real-time after the accident, it also triggered online anger for deleting its apology post, then reposting a similarly worded one after a few hours. Many criticized the department for playing "yet another Party propaganda game." You can read a comprehensive wrap up here. One metro official clarified today that the first apology was taken down because "many felt the wording wasn't appropriate."

Shanghai Metro Department's second apology post: [Apology again] Today is the darkest day in the operation of Shanghai subway. No matter what the final reason or responsibility, [we] feel extremely ashamed and regretful for the harm and loss caused for the residents. We are trying our best to rescue the injured and resume operation; we also collaborate with related departments for further investigation; we are determined to put an end to more accidents, even though our apologies pale in comparison with the practical damage. We still want to issue our sincere apology.

Shanghai Metro Line 10 (十号线) – As netizens continue to focus on the collision, many are also posting people's reactions today after the metro line resumed operation. One user, @XuYiZhou_Jo (@徐一舟Jo), snapped a picture of a super protected passenger at the station which went viral on Weibo.

This cautious passenger, @WuHeng (@吴忄亘), later posted another image of his "SWAT attire" on metro line 10, attracting thousands of reposts.

Netizens discussing the launch – many giving the project their blessings but many expressing indifference. Since the launch is ahead of China's National Day celebrations this Saturday, some also criticize the timing for being yet another Party propaganda.

@KeLaoDist: I don’t care at all. Just like all the gold metals during Olympics, this has nothing to do with taxpayers other than spending their money.
克劳嗲ist: 真不关心。就像奥运会上的金牌一样，不关纳税人的事，还花了纳税人的钱。

@PangCiBlog: China’s corruption could affect high-speed railway, it is only a matter of time until it affects space technology!
肥兹博客: 中国腐败可以烂到高铁地铁，烂到航天也是早晚的事！

iPhone5 – Netizens discussing Apple’s intention to unveil iPhone 5 on Oct 4. Many guessing what the green phone icon with one missed call represents.