Is it Pebble's Time to shine?

It's hard to talk about the Pebble Time without mentioning the Apple Watch.

Pebble, the pioneers of the smartwatch, unveiled their latest product just before the world's most valuable company is about to enter the market.

But I feel like there's room for both products. END_OF_DOCUMENT_TOKEN_TO_BE_REPLACED

Steve Jobs wanted the iPad to herald a revolution in textbooks.

In his biography of the late Apple co-founder, author Walter Isaacson said Jobs saw textbooks as another market ripe for disruption by releasing digital versions on the iPad.

Digital textbooks usually include dynamic elements, like pictures or video clips. Chaim Gingold has taken that to the next level with "Earth Primer", an app that teaches you about our planet by letting you play with an interactive model of it.

"Earth Primer" allows you to summon rainclouds to send streams of water cutting through mountains to demonstrate how erosion works instead of just telling you. You can also raise the sea level, create glaciers, even move continental plates around - all to explain the inner workings of the Earth.

Watch Gingold tell Kristie why he created the app in the clip above.

Forget what you know about conventional printing – and start thinking three-dimensionally.

3D printing – once considered niche – is now becoming more mainstream. UPS, for example, just expanded its 3D printing services to locations across the United States to keep up with demand.

But Bre Pettis and the folks at Stratasys are working to bring 3D printing to your home.

Pettis is the co-founder of Makerbot, the company that pioneered 3D printers for consumers. Now at Makerbot’s parent company, he’s part of an innovation workshop called Bold Machines.

“We’re exploring the frontier of what’s possible,” Pettis says. “Imagine Iron Man’s workshop. We’ve got all the 3D printers in the Stratasys lineup – from Makerbots to wax printers – that make wax 3D models that you can then take into a foundry and make beautiful customized jewelry.”

So how does it work? END_OF_DOCUMENT_TOKEN_TO_BE_REPLACED

Did Apple do enough?

September 9th was one of the biggest days for Apple in years. They introduced two larger iPhones, a mobile payments system, and the long-awaited Apple Watch - the first major new product created without the input of the late Steve Jobs.

But are any of them new enough?

After all, the trend for larger phones was pioneered by their arch-rival, Samsung. Mobile payment systems have been around for some time now. And while everyone expected Apple to completely redefine what a smartwatch is... the Apple Watch appears to be just a better version of what's out there; an evolution of current smartwatches instead of a revolution.

So how did Apple do? The New Yorker's Nicholas Thompson gave his take to Kristie Lu Stout.

There’s something a little strange that one of today’s hottest trends in technology is… virtual reality.

It’s an idea that seems past its time; sitting alongside household atomic generators and personal jetpacks as visions for the future that seem laughable today. But VR isn’t a joke anymore.

I had the chance to try on the headset that has almost single-handedly revived interest in virtual reality: the Oculus Rift.

For now, the Rift is only in the prototype stage and has some way to go before it’s ready for consumers. Still, even at this early stage the potential of the Rift is incredible.

It looks big and bulky, but once it was strapped to my head I couldn’t feel the weight of the Rift. The whole setup is slightly cumbersome; you have the headset, then you have to put on headphones and find your controller — without being able to see either, because your eyes are covered by the Rift.

My first impressions of the Rift? It’s a little unsettling. I was surprised by the low resolution of the screen, individual pixels reminding me that my eyes were millimeters away from them; I was acutely aware of the edges of the display; and basically, I could feel like I had a big plastic visor strapped to my face.

But then you move your head… and your view of the world shifts almost perfectly with your movement. Move your head to the left, and you’re looking left.

I played a 3D platforming game called Lucky’s Tale (from the creator of Words With Friends). To be brutally honest, it felt a little like a simple Mario clone: You make a cute little fox run and jump along a basic path running from left to right. Then the path turns back to the left… and you find yourself scoping out the way ahead simply by turning your head to look at it.

Video games have allowed you to move your view of the world for years through a controller. It’s not a new idea. But with the Rift, looking around a game’s world is as natural as looking around our own.

That’s when the Oculus Rift experience starts to click, and it all starts to work.

END_OF_DOCUMENT_TOKEN_TO_BE_REPLACED

Why would Nike kill the FuelBand?

Sometimes it feels like everyone is wearing a fitness band on their wrist, whether it's the Fitbit Flex, Jawbone Up or Nike FuelBand.

But now there are reports that Nike might kill the FuelBand.

Why would Nike kill an apparently popular gadget?

The New Yorker's Nicholas Thompson suggests that Nike might be trying to pull out of dedicated fitness bands before they're replaced by other wearables - such as the much-hyped Apple smart watch.

"Think about the Flip video camera, which was a huge sensation, everyone thought they'd be huge. And then suddenly the iPhone can take videos that are just as good, and Flip went away."

Samsung on "cruise control" with GS5, but shines with Gear Fit

Samsung's latest flagship smartphone is out. The reviews are in. And the reaction is...

"What you're seeing here is a Samsung that's very much on cruise control," says Chris Ziegler, deputy managing editor of The Verge.

"It's an evolution of the S4, not a whole new phone. There were some of us who were hoping they would take a little bit of a leap here, go to an aluminum body, maybe a new user interface, but really it's just an evolved S4."

Compared to its predecessor, the S5 has a bigger screen, a better camera and a faster processor.

There's also a fingerprint sensor built into the home button, just like what you find in the iPhone 5s.

But one big change in the Galaxy S5: there's a built-in heart rate sensor. Does that score points for Samsung?

"The fact that they included a heart rate sensor in the GS5 really isn't surprising when you consider fitness is a buzzword in mobile now," Ziegler tells me.

Along with the Galaxy S5, Samsung unveiled three smartwatches at the Mobile World Congress – the Samsung Gear 2, the Gear 2 Neo, and the Gear Fit.

For Ziegler and his fellow editors at the Verge, the slender and form-fitting Gear Fit stole the limelight at the big reveal in Barcelona.

"Of the new smartwatches that they showed yesterday, that would be the winner for sure," says Ziegler.

News Stream usually brings you stories about the power of technology to improve our lives. But in 2013, the top tech story was more ominous.

Since June, revelations about the U.S. National Security Agency's surveillance programs have come to light. The fallout has been felt in Washington and the rest of the world.

Tech companies have expressed outrage over the U.S. government's spying practices. Listen to Google's chairman Eric Schmidt in Part 1 (above).

In Part 2, hear from Wikipedia's Jimmy Wales and examine the new generation of gaming consoles.

Finally in Part 3, astronaut Chris Hadfield speaks about his popular videos from space. And we ask what the future holds for mobile technology.

We hope you enjoy these highlights from 2013. We look forward to the year ahead! 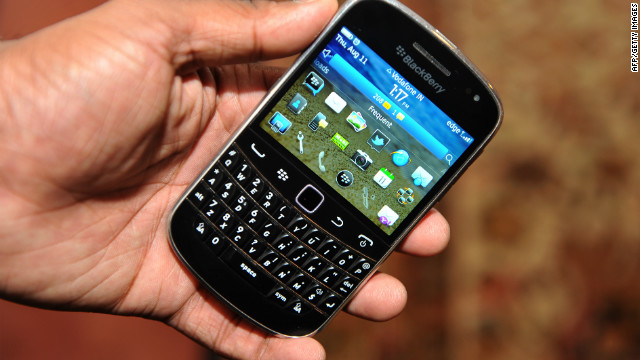 BlackBerry: Why breaking up is hard to do

Hong Kong (CNN) - I can't even remember the last time I thumbed a message on its itty-bitty qwerty keyboard.

And yet, I stubbornly keep my BlackBerry in my bag and on my desk, fully charged.

As with my Palm Vx of yesterday, breaking up with a beloved gadget is hard to do, especially when you have history.

END_OF_DOCUMENT_TOKEN_TO_BE_REPLACED

Decide for yourself as Samsung Mobile's Ryan Bidan shows Covert the primary features of the device.