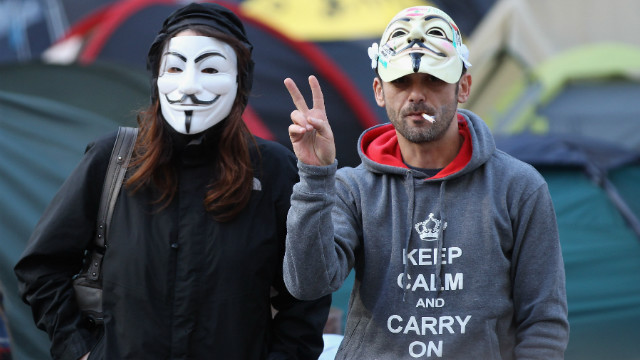 What do Occupy London protesters have in common with terror groups like al-Qaeda and Colombian rebels FARC?

They are all named on a letter warning of potential terrorist threats sent to businesses by the City of London police.

The letter, labeled a "Terrorism/Extremism Update" lists al-Qaeda, FARC and Belarusian bombers as contributing to the "substantial" international terror threat to the UK and adds Occupy London under a "domestic" heading.

It states: "City of London Police has received a number of hostile reconnaissance reports concerning individuals who would fit the anti-capitalist profile. All are asked to be vigilant regarding suspected reconnaissance, particularly around empty buildings."

The document was passed to Occupy London protesters at the Finsbury Park encampment over the weekend, and unsurprisingly, the response from the group has been critical.

On the Occupy London blog, the group complains that "activism is not a crime and the desire to participate in democratic decision-making should not be a cause for concern for the police in any free society". It goes on to say that the "document exhibits other signs of worrying paranoia".

City of London Police stress that the letter does not explicitly link the Occupy London group with terrorism but Occupy London continue to call for clarification of the document's language.