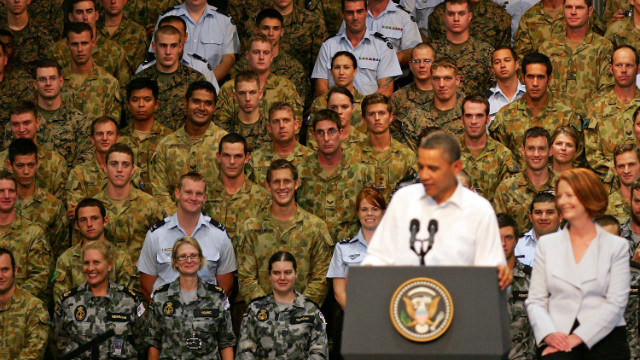 It turns out that Australia is just one of approximately 150 countries where U.S. military personnel are stationed. It's probably not a surprise to anyone that the largest number of American troops based outside of the U.S. itself are in Afghanistan and Iraq, but here is where it gets interesting (if you are a data geek like me, anyway)...

Germany is home to the most American Army and Air Force troops outside the continental United States, with 54,431 based there. 35,329 U.S. military personnel are stationed in Japan, including the most U.S. Marine and Navy troops based on foreign soil. According to Reuters, 28,000 U.S. troops are currently in South Korea.

A further seven countries are host to more than 1,000 U.S. personnel each, including Italy, Spain, the UK, Turkey and the tiny African nation of Djibouti.

Did you know that there are 153 U.S. Air Force personnel stationed in Greenland, for example? Or that there is a single member of the U.S. Army and 5 Marines based in New Zealand?

And finally, there is the team's favorite tidbit: there are 43 lucky U.S. troops based in the island chain of the Bahamas. It must be such a difficult place to be posted to...